The Eiffel Tower is approximately 300 metres tall. The Ping An Finance Center, in Shenzhen is almost twice this height, at 599m. Today, there are around 95 skyscrapers that fall between these two extremes. They are called supertall skyscrapers, and of these, more than 70 were built after 2000 (only one of these is Australian – the Gold Coast’s Q1, at 323m).

Blowing these buildings out of the water, however, is Dubai’s Burj Khalifa, at almost 830m. When it was opened in 2010, it not only beat Taipei 101 in Taiwan for the title of “tallest building in the world” by a whopping 300m, it also became the world’s tallest man-made structure. It also needed a new classification, so the megatall designation was created, currently covering all buildings over 600m.

As of today, there are three completed megatall skyscrapers, with a further four under construction, all in Asia (including the Mid East). If completed in 2020 as planned (Update: The project is currently on hold, with the completion date unknown), the Jeddah Tower, in Saudi Arabia, will be the tallest of these, and the first man-made structure to reach a kilometre in height (1000m exactly). 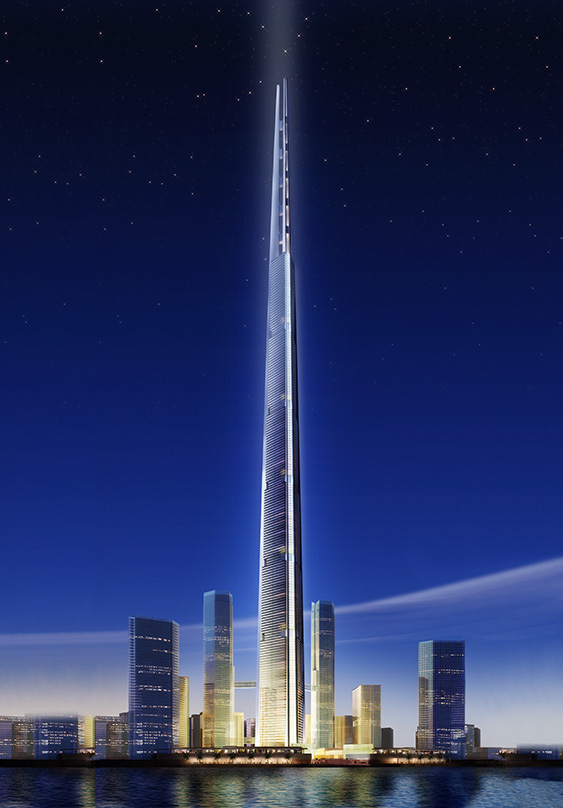 Nine buildings by 2020 may not seem like that many, but it will bring with it an increase of skyscrapers within the supertall range (each year, more of these skyscrapers are being completed than the previous year), and also forecasts an exponential growth in the megatall category in the following period (to 2040).

First of all, why would we want to build structures this tall? The first clue is the location of these structures. Like the first supertall buildings, which were built in the USA in the 1930s (the Chrysler and Empire State buildings), the first megatall buildings will serve as a monument to the rising nations that built them, and a signal a shift in the global balance of power (how accurate that turns out to be remains to be seen – particularly in a Middle East region that sits in the crossroads of oil dependence and whatever comes next). These structures also draw tourists, as well as businesses seeking the prestige of working from one of these buildings. The second reason is that, as population increases and land prices around the world rise, vertical height becomes a solution for housing more people in a single piece of land. Higher density housing (or office space) reduces the individual cost of each resident, as well as increasing the amount of people that can physically occupy a city. It also allows for more efficient use of city resources, such as public transport, roads, water and power.

The next question is how do we keep building structures that are taller and taller? Most modern skyscrapers make use of a tube system, with external columns supporting an internal building core. To support the Burj Khalifa’s extra height however, a buttressed core is used, with the “wings” of the tripod-like lower structure being used to support the narrower top structure. This has allowed the building to break through the height restrictions imposed by the tube system, explaining the huge difference between it and the previous tallest building (Taipei 101). 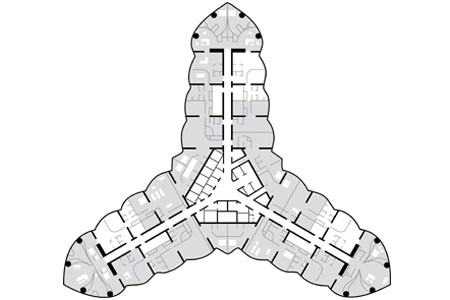 The buttressed core design of the Burj Khalifa

Tall buildings are designed to sway in wind, or in the event of earthquake, which prevents stress or breakage of the structure. To minimise the amount of sway, without fixing the structure, most structures above 300m make use of dampers, a kind of pendulum, acting as a counterweight against building movement. The main damper in the Taipei 101 building is 660 tonnes (about as heavy as 4 houses), and is shown below. Interestingly, the Burj Khalifa does not use dampers, instead relying on the shape of the building to disrupt the wind currents, and reduce their power.

Other improvements, such as increasing elevator speed and maximum length, improved materials such as glass and steel, and more effective safety systems are also making taller buildings possible. Combining engineering improvements with technology, such as 3D printing which makes prototyping much easier, means that we can build structures that are safe at even greater heights.

As previously alluded to, the ever greater height of buildings allows for increases in population density, which can lead to efficiency gains. However, it also creates problems that must be overcome, some obvious, some not-so-obvious (by the decree of Dubai’s top cleric, Burj Khalifa residents living above the 150th floor had to endure an extra 3 minutes of fasting during Ramadan – because it took that much longer for the sun to disappear over the horizon than for those at ground level!). Often the infrastructure supporting the city does not grow fast enough to realise the extra efficiencies. As city populations increase, the systems supporting them must be improved (roads are a good example). Add to this the extra time it takes to simply exit your building from the upper floors. To combat this, these buildings must become more like stand-alone communities, providing not just living spaces, but also amenities, leisure activities and even natural spaces such as parks. If this becomes the future, how does society respond to these increasingly isolated communities of people, and what happens to those on the outer?

Matt Tank is a business and technology consultant, with a focus on cloud-based technologies that spur innovation with their scalability, agility and flexible cost models.

Reflecting a wide variety of interests, this blog covers a mismatch of topics, with a technology slant.

Starts out clickbait-free, but you won’t believe what happens next.